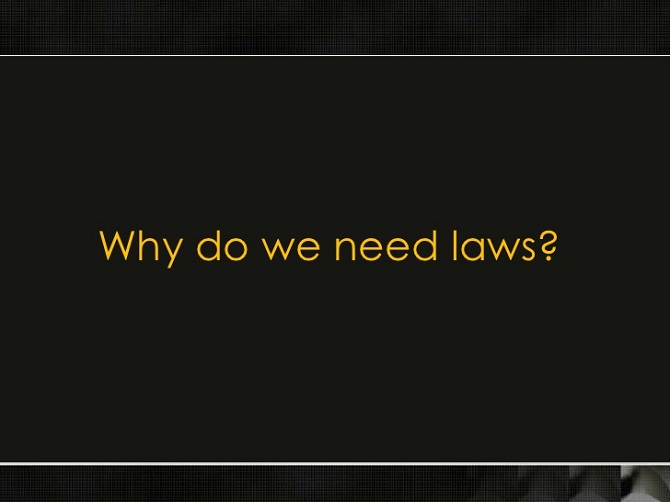 Hello and good morning guys, welcome back to my website. Today I want to share with you a topic about laws. So, according to your opinion and understanding, what do you think about law? Why do we need laws? Isn’t life would be a lot easier without law or something like that? Isn’t life would be more interesting without any restriction? Well, to answer all those questions, let’s talk about law and why law exist today. So, what are you waiting for? Check it out!

Why Do We Need Laws?

As a civilization being, do you think we really need laws? I bet there are a lot of people out there that also questioning like me but remain quiet to avoid trouble. I also dare to bet that there are a few people that think life would be a lot easier without laws, right? So, what type of person are you? Do you supporters of laws? Or maybe the one who stand against laws?

Well, I can’t tell that there is only one side that right on this topic. I think both of them have different ways to see this problem. The pros team seeing laws is needed because they see that at last if laws exist they have a weapon to protect their own self from world cruelty. However, one of laws greatest weakness is sometimes laws didn’t have any power to fight people with a higher status it’s like laws only applicable to the lower people. That’s why some people will say that law is useless because they are blunt to the top but sharp to the bottom.

However, the absence of laws itself will make the more chaotic situation. Can you imagine this world without laws?That’s why laws become so important to keep. However, even though this world already screwed up, there are still so many people that try to erase and replace rules with their own idiom, isn’t that irony? I think maybe they never learn about what is laws in their elementary school and that’s why they think that law only a toy for them.

They also forget the importance of laws that can keep the world balanced and fair for several people. However, even though we tried so hard to make justice shine on this era. A number of people who use laws as their tool and shield like ISIS even increasing. That’s why groups like Anonymous and many other groups who think that they need to take part in this era to fix this era. However, some people like government already pick them as a villain. Irony? Yes, that’s the real irony. So, what are you thinking about laws now?

Maldives Solo Travel: Where to go and What to do